This morning we slept in a little bit.  We weren’t in a hurry to get to Pittsburgh (well, Jim may have been), so we decided to take it easy.  We got up, had a pretty good breakfast – as far as hotel breakfasts go, packed up our stuff, got everything re-situated in Grizzy, and were back on the road around 8:15.

At approximately 8:17, there was a slight disagreement between the driver and the navigator.  A little crabbiness reared its ugly head.  At 8:20, we discovered the dvd player wasn’t working.  I had a feeling it was going to be a long, hard day.  Fortunately, it didn’t take too long before we settled in, calmed down, and got the dvd player fixed.  All it took was a cheap screwdriver purchased at a gas station along the way, and all was right with the world.

The rest of the trip was pretty uneventful.  The kids slept most of the way, Jim and I took turns in the driver’s seat, and before we knew it (actually, just as planned – about 7.5 hours after we left Portage, IN) we arrived at the Super 8 hotel in Pittsburgh.  Once we got checked in and settled in, we ventured out to show the kids the city.

Our first stop was the Church Brew Works.  It was Sunday, after all, and this was technically a visit to church.  I think this is one of the most unique restaurants I’ve ever been to.  Imagine an old Catholic church complete with stained glass windows, pipe organ, and pews.  Now imagine that the pews have been converted to seats at booths, the organ area is a pizza oven, and the altar area now houses the vats for brewing beer.  That’s the Church Brew Works.  The atmosphere is amazing, the food is fantastic and the beer is… heavenly.  Of course, I could not partake of the sinful 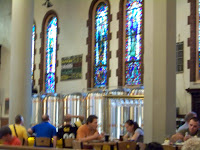 beverage on this trip, but I have tasted their wares in the past and have been very impressed.  Bre, Brooke, and I had variations of Pierogies.  All were wonderful.  I also tried their soup of the day – carrot with ginger.  It was very different, but I enjoyed it. Jim had their Pittsburgh-style salad.  It’s like a regular salad, but with French fries on top.  Everything in Pittsburgh comes with French fries on top!  Of all the restaurants I have eaten in on my travels, this is one of my very favorites.

After our delicious meal, we took the kids to the Duquesne Incline.  It is an old (and I mean old – it started carrying passengers in 1833!) trolley-type car that takes you up the side of Mount Washington.  I use the name “Mount” only because it is the official name.  The hillside certainly is steep, but it is no mountain.  Anyway, Van was so excited to be riding a “train.”  He told everyone on board that we were riding in Toby.  For those who don’t have a child, Toby is a character from Thomas the Tank Engine.  Van is a big fan of Thomas and he was in his glory being on a “train.”

At the top of the hill, Jim was in his glory.  You can overlook the city of Pittsburgh from the top of the incline.  There are so many wonderful things to see.  Right across the river from our vantage point, however, sits Jim’s holy place.  The reason for this pilgrimage, or at least the choice of Pittsburgh as our resting place for the night.  Heinz Field.  We payed homage from the hilltop, took pictures, oohed and ahead.  Then it was time to ride back down to the bottom of the hill.  Again, Van was ecstatic.  This time he acted as tour guide for the others on the ride.  He told them all about riding the “train” up and down and what they would see in the 1.5 minute ride.  He was hilarious!

We concluded our day’s adventures by walking around Station Square, which is a mall area near the river.  They had a movie playing on a small screen in the plaza – Back to the Future.  Fun idea, but we decided we didn’t want to sit still any more today and we moved on.  We found our way to the Hard Rock Cafe.  The girls decided it didn’t really count as a visit to a Hard Rock unless we ate there.  Jim, Van, and I had already eaten there on a previous visit to Pittsburgh, but the girls decided it didn’t count as a visit unless we all ate there.  So… we decided to go in for dessert.  Dessert counts as eating.  Jim and Brooke shared a Hot Fudge Brownie Sundae, while Bre and I shared a piece of Chocolate Chip Cookie Pie.  Van, as usual, wasn’t too interested in dessert (too bad for him!).  The CCC Pie was wonderful.  It is amazing how a tiny slice of deliciousness at the end of a long day can make you feel so good. 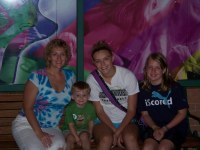 We returned to the hotel to get ready for bed when we discovered one final mishap of the day.  We forgot Van’s pillow at the hotel in Portage, IN.  I called to see if they had found it, but they had not.  They said they’d call the next day after they checked with housekeeping.  I was bummed that his pillow got buried under the pile of pillows left on our bed at the other hotel.  However, it was hard to be too upset when the CCC Pie was still filling my tummy with yumminess.  It was a good day after all.

One thought on “On the road again”

What do you think? I welcome your feedback. Cancel reply

Stories of life for life

The ultimate guide for independent travellers seeking inspiration, advice and adventures beyond their wildest dreams

the quintessential food & travel blog for the modern soul

Lover of math. Bad at drawing.

and their marvelous misadventures

I wander. I see. I photograph. I write. The world is my four walls. This is my beautiful journey2nowhere.

The latest news on WordPress.com and the WordPress community.